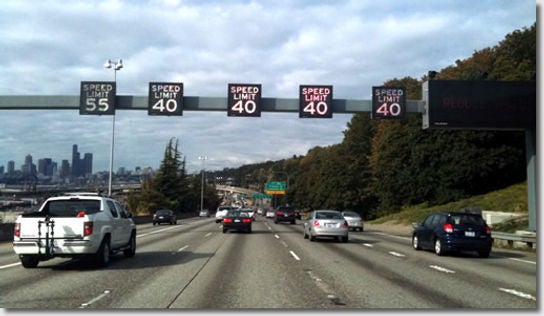 You're cruising along the highway and notice a few brake lights flash up ahead. You take your foot off the accelerator, but before you know it, you've closed the distance and nearly rear-ended the vehicle in front of you. Although the orange construction cones gave you a heads-up, you weren't prepared for the sudden slowdown.

Praveen Edara, a University of Missouri associate professor of civil and environmental engineering, worked with the Missouri Department of Transportation to put variable advisory speed limits (VASL) to the test on one of the most accident-prone stretches of I-270, a four-lane highway in St. Louis, Missouri.

“The idea was to see if warning drivers of slower speeds ahead helped reduce crashes,” Edara said in a statement released by the university. “Where there is queueing, if drivers are not aware of the queue downstream, they don't have enough time to hit the brakes to slow down or stop, thus increasing the likelihood of a crash. Instead of posting a message asking them to slow down, the VASL system posts an advisory speed limit based on the actual downstream traffic speed, so drivers would know that if they're driving 50 mph, they should slow to 30 mph downstream.”

The study found that VASL systems gradually slowed drivers as their vehicles entered construction zones, making them better prepared for changes in speed. For example, the use of VASL resulted in an up to 53 percent decrease in average traffic queue length, and just a 4-to-8 percent increase in travel time – a delay that is nearly imperceptible to most drivers.

In addition, implementing VASL meant that maximum speed differences decreased by as much as 10 mph [16 kph], and the chance of rear-end collisions dropped by 30 percent. Researchers also noted a 20 percent decrease in lane-changing conflicts.